Palm oil is one of the most commonly used types of oil. Palm oil can be used for many different things, it might even be in the things you use daily. Things like lipstick, deodorant, shampoo and toothpaste often include palm oil as an ingrediënt. Palm oil is also used for food, you can find it in pizza, donuts and even in pizza’s. It might be in at least 50% of the products in the supermarket, it’s everywhere.  This is because it’s a resource that doesn’t cost much and is easy to get. But why should we start sustainably producing palm oil?

It’s a huge thing all over the world right now, deforestation. Taking away trees for resources but also to build houses, highways and many different things. Palm oil deforestation is responsible for about 8% of all the deforestation in the entire world. People burn entire forests down to the ground, mainly to just create a clear space for them to work on. They plant palm trees there and grow them, they eventually start making palm oil out of the fruits. Even doing this  is illegal, people keep going. There are many organisations trying to resolve this problem in as many ways as possible, but they need so much more resources and help to get to the goals they’ve set for themselves. 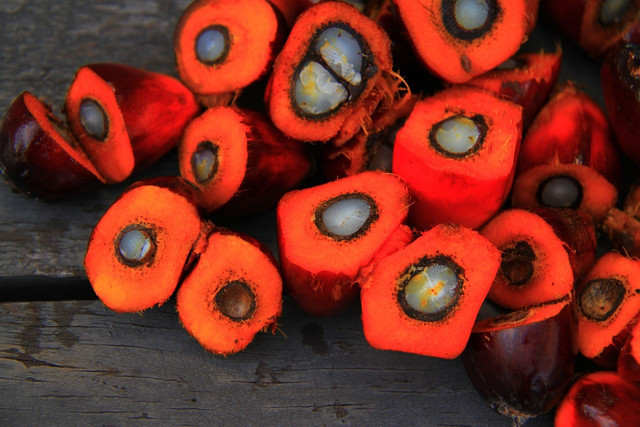 There is more than one type of palm oil. You have the type of oil which is squeezed out of the fruit from the tree and the other one, which is made from the kernel or the stone in the middle of the fruit. Palm oil is something that is used for a lot of things as I stated before, both types are used for different occasions. It’s even used as a biofuel in a lot of countries and as an animal feed. We can’t get rid of palm oil as easily as people would want to, since it’s something used in nearly everything. There’s alternatives you can use but these aren’t produced as much as palm oil is, which makes it even harder to get rid of.

What can we do?

What we customers can do to help resolve the problems surrounding palm oil deforestation, we should be on the lookout for palm oil that has been certified by the RSPO (Roundtable on Sustainable Palm Oil). They have a couple of rules, they check the type of palm oil and if it’s sustainable and all sorts of things. Once the palm oil passes that test it’s RSPO approved and it’s safe for you to buy it.